To share your memory on the wall of Charles Sheaffer, sign in using one of the following options:

Charlie was a 1975 graduate of Governor Mifflin High School and attended West Chester State College (University). He played lacrosse at West Chester and graduated in 1979. He began his career as an English teacher at Exeter Township Senior High School. He transitioned into quality systems management, having worked 38 years with four companies, Gilbert/Commonwealth, Quality Systems, Inc., General Physics Corporation and finally, SAI Global Inc, where he spent over 17 years as the Operations Manager, US and Canada, until his retirement in May 2021. Several of his neighbors were convinced he was employed by the CIA, having worked from home for over the past twenty years. Each move was based on his desire for more responsibility and to get off the road in order to be present in the lives of his wife and daughter, a decision never once regretted.

He enjoyed spending summer weeks in Sea Isle City, NJ, weekends in Ann Arbor, MI, evenings at the Tavern on Penn and every possible moment with his beloved wife and daughter. He was a fan of the Cincinnati Reds, The Washington Football Team, and the New York Knicks, three teams that conspired against him to continually disappoint over the past thirty years. He took particular pride in his daughter’s alma mater, the Michigan Wolverines, and never missed a televised sporting event. Charlie particularly enjoyed gathering with a small but loyal contingent of Wolverine friends to watch big games. Go Blue!

Charlie would like to thank the doctors and nurses at the McGlinn Cancer Center at Tower Health and Hospice care for their care and compassion, and his niece, Daniella Lynch, a physician’s assistant who provided the recommendation for a second opinion with her group of physicians at Columbia-Presbyterian Hospital in New York City.

When you think of Charlie, please don’t shed a tear. Instead, remember the times spent together that brought a warm memory and a smile to your face. He loved life and making people laugh. Death is not the end; it’s only the beginning for those who have accepted Christ as their personal Savior.

A viewing will be held at Kuhn Funeral Home, 739 Penn Avenue, West Reading, on Thursday, June 10, from 11:00am-1:00pm followed by a service at 1:00pm. Donations may be made in Charlie’s name to the American Cancer Society. Condolences may be expressed and webcast accessed at www.kuhnfuneralhomes.com.
Read Less

We encourage you to share your most beloved memories of Charles here, so that the family and other loved ones can always see it. You can upload cherished photographs, or share your favorite stories, and can even comment on those shared by others.

Bailey & Tim, Janice & Bill Dean, and other have sent flowers to the family of Charles John Sheaffer.
Show you care by sending flowers

Posted Jun 09, 2021 at 11:34am
All of us at SAI Global offer our deepest condolences to Doretta and Kimberly. We will miss our friend and colleague, Charlie.

5 trees were planted in the memory of Charles Sheaffer

Posted Jun 12, 2021 at 01:27pm
To Doretta and Kimberly- It was quite a shock to see Charlie’s face in the obituaries. My heart sank for you both. I had no idea he had cancer and was in this battle. My heart and prayers go out to you./ Cancer is such a ugly word! It invaids lives constantly and fiercely. It is cruel. He was WAY to young to leave. Why does it seem to invade right after retirement???? I am thankful he at least had 20 years at home. That was a great decision! / I learned so much about him from his obit. It is sad that all the Calvary Teens ended up scattered in all different churches and areas. We shared a true bond. However, I think we all grew where we were newly planted! I think it is awesome that you ended with, “Death is not the end; it’s only the beginning for those who have accepted Christ as their personal Savior!” Charlie is the lucky one! He has left this messed up and sick world and is in Heaven with Jesus and his parents! (And I have a feeling we will all be seeing him very soon!!!) / I am thankful he is out of pain, but it is your pain I am concerned about. Those left behind to deal with life without their Husband and Dad are in need of our prayers. Please know you have been in mine everyday since I saw this./One time I asked my Mom when I was in my 40’s, “Why does God take the people that are most in love, young, good Christians, and parents?” She said, “I think God would not want to be up there with just old, miserable, misfits! He wants to be surrounded by happiness, humor(like Charlie), babies, children, and young people along with the old!” I found that to be a interesting perspective. Now that I am in my 60’s😳, I realize it is not God who “takes” are loved ones away from us! He does not want that! We just live in a fallen world with all kind of unnatural things around us-pesticides, pollution, food in preservatives, our food sources injected with bad things, and so much more. He created Eden with none of that! Man/Woman ruined that! All I do is pray for a cure!!!! It has to happen soon! ?!?! / I have a passion to pray for widows. I have 10 my age or younger in my circle of our friends. That is too many!! I have 8 chairs at my table and 2 extras. I hope to have a night to honor them, let them share their stories, and feel the support of others that have gone through this pain. Now that Covid is under control, I hope to do that! You are in my thoughts and prayers - Jen Baker
Comment Share
Share via:
BT

I was surprised to see that Charles has passed. I didn’t realize he was ill. My father-in-law, brother-in-law, and my own father passed due to cancer. I empathize with the grief you might be feeling, and possibly the relief that you feel for Charles to no longer suffer from his illness. In the obituary I read that your wish is to celebrate his life and not to feel sad...and I understand that.
Kim, I remember your presence, and success in my Human Anatomy class! You worked extremely hard and I hope that work ethic has been good for you.
I regret that I did not attend Charles’ services this morning, because I truly wanted to be there.
Peace be with you both as you navigate the emotional pathway ahead.
Scott and Lorene Szoke.

Posted Jun 09, 2021 at 05:41pm
We are so sorry for your loss. We love you. You are such special friends. The memories will last forever in our hearts. Go Blue! Love always, 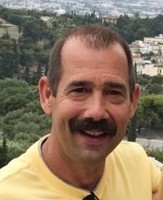