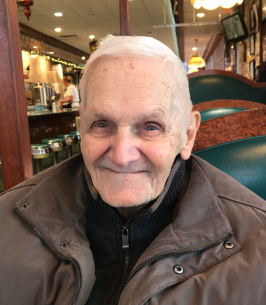 Fred J. Reinhard, 93, passed away on Wednesday, May 4, 2022, in his Whitfield home. He was the widower of Doris A. (Hillbish) Reinhard, with whom he shared a loving marriage of 62 years before her passing in 2012.

Born August 12, 1928, in Reading, Fred was a son of the late Ferdinand and Barbara (Saffer) Reinhard, who both immigrated from Germany.

Fred graduated from the former Central Catholic High School in 1946 and then served as a Corporal with the US Army, stationed in Korea. He was recently awarded the prestigious Ambassador of Peace medal by the Republic of Korea.

Upon return from military service, he worked as a tool and die maker at Lieberknecht Company and subsequently for Western Electric as a tool maker and engineering associate, retiring in 1984. He was also the founder and owner of Reinhards Soft Water Company with many customers served in the Whitfield area.

Fred was a devout Catholic and a founding member of the congregation at St. Ignatius Loyola Roman Catholic Church, Whitfield. He was generous to his entire extended family. Fred enjoyed playing football in high school, but in recent years, he loved to watch reruns of Gunsmoke. He was an honest, caring man and will be missed.

A Mass of Christian Burial will be celebrated on Wednesday, May 18, 2022, at 11:00 a.m. at St. Ignatius Church, 2600 St Albans Dr, Whitfield, with entombment to follow in the Chapel of Resurrection at the Gethsemane Mausoleum, 3139 Kutztown Road, Laureldale. A viewing will be held at the church from 10:00 a.m. until the start of Mass. Condolences may be expressed at kuhnfuneralhomes.com.