To share your memory on the wall of Harry Phillips, sign in using one of the following options:

Provide comfort for the family by sending flowers or planting a tree in memory of Harry Phillips.

Provide comfort for the family of Harry Phillips with a meaningful gesture of sympathy.

He was the loving husband of Maria R. (Steuer) (Esterbrook) Phillips, whom he met on a trip to Rome during the beatification of Mother Teresa in... Read More
Harry E. Phillips, 85, of Wyomissing, passed away in the Reading Hospital on March 13, 2021.

He was the loving husband of Maria R. (Steuer) (Esterbrook) Phillips, whom he met on a trip to Rome during the beatification of Mother Teresa in 2003. They were married in 2006. He was predeceased by his wife, Helen Phillips.

Born in Scranton, he was a son of the late Herbert J. and Viola (Madegan) Phillips. He was a graduate of Scranton Prep and the University of Scranton in 1957.

Harry spent most of his life in Clifford, Pennsylvania where he was a devoted and active member of his community. One of his passions was his volunteer work for the Clifford Fire Company. For over 35 years he did everything he could to help, acting as the secretary, serving as an apparatus driver and playing an active role every summer at the Clifford Fire Company Annual Picnic. For over a decade he also served as an ambulance driver for the Clifford Township Ambulance Association. Treasurer of Clifford Township for many years, he was a member of the Montrose Planning Commission and was the president and later treasurer of the Susquehanna Tax Collectors' Group. He was instrumental in starting a local chapter of Boy Scouts of America Troop in Clifford and served as its leader for a number of years. Active in his church, he served as a lector and Eucharistic minister and he was involved in the Lay Missionaries of Charity, participating in trips to Mexico and Haiti, while a member of St. Rose's RCC, Carbondale. Most recently, he was a member of Sacred Heart Roman Catholic Church, West Reading.

Harry started his career with GMAC in their finance department where he worked for 34 years. For his second career he became the tax collector for Clifford Township for 18 years, retiring in 2016. He referred to his job as tax collector as “one of the best jobs ever”. It was an important job for the community, and it provided the opportunity to meet so many people which allowed him to make great friends and relationships that lasted the rest of his life. Harry’s Clifford community meant everything to him and after he retired and moved to Wyomissing he remembered everyone and his life in Clifford fondly.

A visitation will be held on Friday, March 19, 2021, from 6 to 7 p.m. at Edward J. Kuhn Funeral Home, Inc., West Reading, with a prayer service to begin at 7 p.m. A virtual mass can be viewed on Saturday, March 20, 2021, at 9:30 a.m. on his page at www.parisefuneralhome.com. Contributions may be made to the Clifford Township Fire Company, P.O. Box 10, Clifford, PA 18413. Condolences may be expressed at www.kuhnfunerahomes.com.

Receive notifications about information and event scheduling for Harry 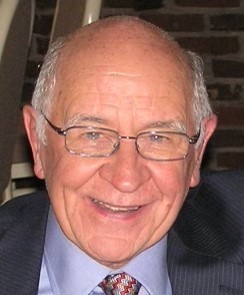 We encourage you to share any memorable photos or stories about Harry. All tributes placed on and purchased through this memorial website will remain on in perpetuity for generations.

Harry was the embodiment of kindness; a true gentleman in every sense. He was loved by all and will be missed. His loving spirit will live on. Maria & Harry were a beautiful couple who enjoyed life to the fullest. Fly with the angels,Harry! God Bless!
Roseann & Steve Finkel
Comment | Share Posted Mar 15, 2021 at 07:36pm via Condolence
JW

I will remember always Harry as a kind, loving gentleman. He was always interested in helping others. May his family and those whose lives he touched be comforted by the many happy memories. God bless you Harry Phillips.
Comment | Share Posted Mar 15, 2021 at 03:52pm via Condolence