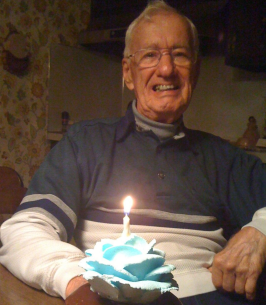 Howard James Boyer died on Monday, May 16, 2022 at the age of 98 in Fairlane Gardens Nursing and Rehab at Reading.

Howard was born on November 2, 1923 in Reading, PA, the longest lived child of the late Aaron Abraham and Carrie Estelle (Folk) Boyer. He was the life partner of Naomi Gutacker, who preceded him in death.

Howard graduated from Reading Senior High School in June 1941. He served as a driver during World War II (1943-1945) in the Army 3582nd Quartermaster Truck Company for which he received EAME Campaign and Good Conduct Medals. He participated in the Red Ball Express to resupply Allied forces moving quickly through Europe. After the war, he was employed at Berks Auto Ignition, a division of Auto Parts Company and as a manager at RPS auto parts store. He also sold foreign cars part time at Eisenhower Motors in Wernersville. From this position, he brought home a BMW Daffodil, and Isetta, and a Peugeot which his step kids learned to drive when they were sixteen. Howard also drove race cars in the Reading Duryea Hill Climb.

Howard, or Poppop, as he was known by so many had a witty sense of humor. He like driving and traveling. He enjoyed collecting toy cars and trucks. He and Naomi loved dancing and socializing. In his later years, he enjoyed spending time with his family, especially the grands. Poppop will be greatly missed by all who loved him.

There will a short, military-style service at his grave site at Sinking Springs Cemetery at 11AM on Friday, May 20, 2022. In lieu of flowers, contributions can be made to St. John’s Lutheran Church, 4125 Penn Ave, Sinking Springs, PA 19608; or Purple Heart Foundation at purpleheartfoundation.org.

Edward J. Kuhn Funeral Home, Inc., West Reading is in charge of arrangements. Condolences may be expressed at www.kuhnfuneralhomes.com.