To share your memory on the wall of J. Richard Schaeffer, sign in using one of the following options:

Provide comfort for the family by sending flowers or planting a tree in memory of J. Richard Schaeffer

Provide comfort for the family by sending flowers or planting a tree in memory of J. Richard Schaeffer

Print
J. Richard Schaeffer, 97, of West Lawn, peacefully completed his journey on Earth on May 3, 2021, in his residence.

He was born in Lancaster, a son of the late Ruth (Schultz) and Roy L. Schaeffer. He was predeceased by his wife of 76 yea... Read More
J. Richard Schaeffer, 97, of West Lawn, peacefully completed his journey on Earth on May 3, 2021, in his residence.

He was born in Lancaster, a son of the late Ruth (Schultz) and Roy L. Schaeffer. He was predeceased by his wife of 76 years, Ruth P. Schaeffer.

He graduated from McCaskey High School, Lancaster, in 1941. Upon graduation, Dick joined the Coast Guard and proudly served as a radioman on the USS Bayfield. He took part in four World War II invasions: D-Day in Normandy on Utah Beach, Southern France, Okinawa, and Iwo Jima.

Dick worked briefly for the city of Lancaster before working as a pawnbroker for Selfon Pawn Shops in Lancaster and Reading. He became a manager at Kay Jewelers and opened new stores in Hagerstown, MD, and Wilkes Barre, PA, before moving to the Reading area in 1960 where he was employed at Whitman Jewelers. He became registered as a Certified Gemologist while working at Arthur Schwemmer Jewelers and eventually became president and co-owner. He retired in 1985 as owner of Diller’s Jewelry Store in West Reading.

Dick was always involved in his community. His alma mater, McCaskey High School, had a swimming pool and he was surprised to find no high school in Berks County had a pool. He spearheaded the campaign to build the first pool in the county at Wilson High School, and then served for many years on their Building Authority. He became an active volunteer, contributor, and supporter for his children’s’ many activities. He joined Bausman UCC in Wyomissing in 1961 and was a faithful member who served on many committees and Consistory. He was a Mason and member of Lodge No. 62 in West Reading.

He loved spending summers at Ocean City, NJ, with his family, and he and Ruth traveled extensively throughout the United States and Europe. His love of family, concern for others, unflinching integrity, and devotion to Ruth will always be remembered.

The family extends heartfelt appreciation and love to the team of devoted caregivers who faithfully cared for Ruth and Dick the past three and a half years. Bayada Home Health Care offered compassion and support in Dick’s final weeks.

Relatives and friends are invited to attend Dick’s Celebration of Life service to be held at Bausman UCC, 1064 Penn Avenue, Wyomissing PA 19610, on Tuesday, May 11, 2021 at 11:00 am with Pastor Mark Johnson officiating. The family will greet guests from 10:00-11:00 at the church. Due to limitations caused by the pandemic, seating for the service will be limited.

In lieu of flowers, contributions may be made in Dick’s name to Bausman UCC at the address above.

The Edward J. Kuhn Funeral Home is entrusted with arrangements. Condolences may be expressed at www.kuhnfuneralhomes.com.
Read Less

Receive notifications about information and event scheduling for J. Richard

We encourage you to share your most beloved memories of J. Richard here, so that the family and other loved ones can always see it. You can upload cherished photographs, or share your favorite stories, and can even comment on those shared by others.

Posted May 10, 2021 at 10:39pm
What an incredible man! Dick and Ruth were friends from Church. They served as examples of servant leadership. Dick’s service to the US through his military commitment is impressive. It was a privilege to know him. Please accept our sincere sympathy.


Ruth and Dick were friends from Church. They were great examples of servant leadership. Dick‘S outstanding service in WWII was so impressive. He deserves much respect. Please accept our sincere sympathy.
Bruce and Renee DIetrich

Posted May 09, 2021 at 09:02am
Jay
My thoughts are with you and your family at the passing of your father.
John Kluck
Comment Share
Share via:
MK

Posted May 08, 2021 at 01:13pm
We shared many a bridge game and dinner with Dick and Ruth. We are so sorry we cannot attend the service, but Barbara, you and Jay will be in our thoughts as time moves on. Martha & Chuck Krohn

Posted May 06, 2021 at 11:14pm
Dear Jay & family, I am deeply saddened to know that your father passed away. He contributed so much to the Wilson Community, and others where he lived during his life. He served our country as well with. You must be so proud of his accomplishments. Frank and I remember his "permanent" smile just like yours, and your mother's cheerfulness. It must have been lovely to grow up in a loving an caring family. Please accept my most sincere sympathy on your loss. Linda
Comment Share
Share via:
LF

Sorry, I didn't finish the sentence...."He served our country as well with devotion and bravery." 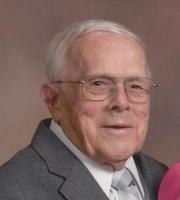 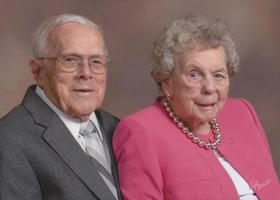