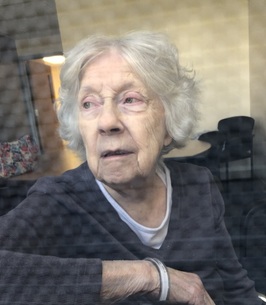 Jeanne was the daughter of Irwin and Minnie Brosey Swavely. She was the delight of her father’s eye -continually doting on her and encouraging her. Jeanne first learned to read while sitting on her father’s lap viewing the comics in the newspapers. This started her lifelong love affair with reading.


Jeanne grew up in Kenhorst, PA with her brother Jack. Always an avid reader with a keen thirst for learning, she graduated from Shillington High School. At the time she would say she didn’t like the place she lived because it was too much like home. She had touch of whimsy and romance inspired by the wonderful books she read and the melodies of Harry James (“It’s Been a Long Long Time” and Perry Como’s “Till The End of Time”). While working nights and attending Albright College she met a charming and very handsome young man named Angelo and his young son, Jimmy. She was so taken with this little boy that the decision to marry Angelo came quickly. The rest of the children soon followed: Kathryn, Alfonso, Alexis and finally David. These five remain very close to this day-probably the best tribute to her.


Jeanne graduated from Albright and also achieved a Masters Degree from Kutztown State College. She was a Reading Specialist in the Schuylkill Valley School District. She was all about education and learning. The home was filled with books. Each day there were 5 daily newspapers, Time, U.S. News and World Report, Newsweek, American Heritage and Horizon magazines. She knew stuff!


She once found an error in the World Book Encyclopedia and wrote to them to let them know. They acknowledged the error and updated the listing. She knew stuff.


She left her teaching position and returned full-time as administrator to the family business Keystone Furnace. Handling five kids and the challenges of family life may not have been what she dreamed of, but she kept them safe and taught values that last longer than a single lifetime. She was tough.


She and Angelo both were passionate about making their community a better place. She worked tirelessly as a member and officer in the Berks County League of Women Voters. She was on the board of the Western Berks Water Authority. She was instrumental in the restoration of the aging West Reading Sewer Plant. It was converted to a community building called the Bicentennial House. She raised money to continue the Fourth of July Fireworks display in the late 1970’s when this event faced financial challenges. She had an impact.


Jeanne was also involved in a new type of Cable Access Television programing. It was an interactive call-in program that allowed her to interview local government office holders. This was new. Viewers could call in during the interview and ask questions on-air! These shows on Berks Community Television were ground-breaking and used as a teaching tool in communities across the US and Europe. Jeanne had several different programs over more than 25 years. She spoke with local craftsman and artists as well as politicians. As she went about her travels throughout, the county she would frequently be recognized. It always made her smile.


Jeanne was creative. She loved to sew and always had a beautiful garden. If you had a question on birds or plants, she would be your go to reference. What an amazing mind!


She loved great conversation and exchanging ideas. She knew what she was talking about…


In the spirit of her deep love and appreciation for learning and education, Jeanne was clear that her body should be donated to a Pennsylvania teaching hospital. This wish was honored by Humanity Gifts Registry http://www.hgrpa.org


Jeanne is survived by all five of her children: James in O’Fallon, IL, Kathy (Alan Welch) in Jacksonville, NC, Al (Pat Vath) in Wyomissing, Alexis and David in Allentown; four grandchildren: Richard and Ryan Vanaman in Morgantown, WV, Jen Tebbe (Nathan) in O’Fallon, Illinois, Eric Tucci in Wyomissing; and six great grandchildren. In addition to her husband, Jeanne was predeceased by her brother Jack Swavely and one grandson.

The family wishes to express gratitude to Berks Heim and staff for the excellent care they gave Jeanne.