To share your memory on the wall of Jeanne Perkins, sign in using one of the following options:

Known for her kindness, generosity, intelligence and faith, she will be much missed.

Funeral and celebration of life arrangements will be announced in the next few months. Donations can be made to the Lincoln Park Community United Methodist Church, 1 Carlisle Ave, Reading, PA 19609 or The Perkins Scholarship Fund at Penn State Berks, Development and Alumni Relations, PO Box 7009, Reading, PA 19610. The Edward J. Kuhn Funeral Home, Inc., West Reading, is entrusted with arrangements. Condolences, tributes, and fond memories may be expressed at www.kuhnfuneralhomes.com.
Read Less

Receive notifications about information and event scheduling for Jeanne

We encourage you to share your most beloved memories of Jeanne here, so that the family and other loved ones can always see it. You can upload cherished photographs, or share your favorite stories, and can even comment on those shared by others. 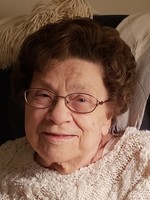