To share your memory on the wall of Joan Magliozzi, sign in using one of the following options:

Print
Joan F. Magliozzi, 83, passed away peacefully in the comfort of her Bern township residence, Thursday, May 6, 2021. She was the loving widow of Captain Ateo Richard Magliozzi, Air Force, who passed away in 2014.

Born in Newport News, VA... Read More
Joan F. Magliozzi, 83, passed away peacefully in the comfort of her Bern township residence, Thursday, May 6, 2021. She was the loving widow of Captain Ateo Richard Magliozzi, Air Force, who passed away in 2014.

Born in Newport News, VA, she was a daughter of the late Brigadier General James Francis Joseph Early and his wife, Mrs. Jean (Zane) Early. Accompanying her father during his duties in the European theater, Joan attended high school abroad in France. Joan completed her undergraduate studies at Mount Holyoke College in South Hadley, Massachusetts.

For many years Joan worked as a claims underwriter for CNA until her retirement in 2007. Later in life Joan fell in love with the handsome and affectionate Keeshond, and she traveled extensively showing her dogs.

Her pride and joy was her family’s dedicated and honorable military service, her beloved keeshonds, and her dearest daughter, Kathy.

Joan’s memory will be treasured by her daughter, Katherine Grant, wife of Stewart Grant, Esq., of Golden, CO, and her grandson, Raymond S. Grant, husband of Samantha Argos, of Denver, CO. She is also survived by many nieces and nephews. In addition to her parents and husband, Joan was predeceased by her sister, Jean Murphy.

Joan will be interred privately beside her husband, Richard, at Ft. Indiantown Gap National Cemetery Annville. In lieu of flowers, contributions in Joan’s memory may be made to Peak to Peak Keeshond Fanciers c/o Carol Schwenk 220 Cypress Circle, Broomfield, CO. 80020, or from their website via PayPal, PPKF.org.

We encourage you to share your most beloved memories of Joan here, so that the family and other loved ones can always see it. You can upload cherished photographs, or share your favorite stories, and can even comment on those shared by others.

Posted May 12, 2021 at 02:21pm
My sincere condolences to Joan’s friends and family. Joan was so kind to all that knew her. She was such a sweet and welcoming person. I’m so glad I was able to know her. She will be missed!
Tanya
Comment Share
Share via:
DH

Posted May 08, 2021 at 03:35pm
Our deep and most sincere condolences to all who loved and treasured Joan.

Posted May 08, 2021 at 03:30pm
Gosh, how do I even summarize who Joanie was to me and my family? The impact she imprinted in our lives and on our hearts? Joan was so intelligent, but never condescending. An educator at heart but with a passion to learn more and so very wise. Growing up I remember with such fondness, seeing Joanie (and sometimes Dick) sitting around the table, campfires, ringside or backyard talking dogs with my parents, analysing pedigrees and speaking in a language I did not yet understand. I remember fits of infectious laughter and get togethers with happy Keesies running around under foot. As a young teen, I remember Joanie sneakily giving me a taste of the chocolate liqueur she and mom were enjoying, and her winking at mom with a smile, while saying "it's more chocolate than anything!".
Several years ago, I reconnected with Joan to talk dogs once again. She was still sharp as a tack, mentoring me from afar, just as she had done with my parents years before. Oh, how I will miss her messages terribly 😞. I wish the pandemic hadn't taken away my chance to visit her one last time.

Rest in Peace Joanie, you were loved and treasured beyond measure. I know you are looking down, surrounded by your beloved husband, Dick, your parents, as well as all your Keesie babies. My deepest and most sincere condolences to her daughter Kathy and family. Devon Hawkins (nee Beasley)
Comment Share
Share via:

Posted May 08, 2021 at 03:26pm
I've known Joan forever, it seems. She was an icon in the keeshond breed. A welcoming person at dog shows and a knowledge expert. My sincerest condolences to her family and friends. She will be missed!
Comment Share
Share via: 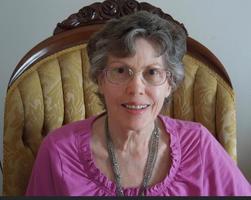