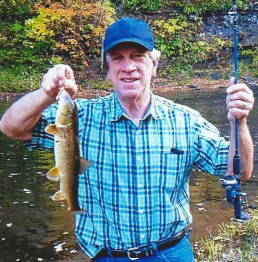 John Edward Hoebee, 73, of Sinking Spring passed away on Monday, May 30, 2022, while vacationing in his hometown of Milton, Delaware. He was the husband of Natalie (Davis) Hoebee, with whom he would have celebrated 44 years of marriage on June 10.

Born in Milford, DE, he was the son of the late Ralph Jr. and Mary (Forst) Hoebee. He graduated from Delaware Technical Community College with his Applied Associates degree in electrical engineering. From 2014 until his passing, John worked with Optimum Controls as an electronic technician. Previously, he worked for Agere Systems/Lucent Technologies/AT&T/West Electric from 1981 until the company’s closing in 2003. He soon reentered the workforce with Mass Industrial Control from 2004 until 2012.

John was a whiz with electronics and loved to fix things-- his happy place was his garage, where he had a full work bench of tools and equipment. No matter what was broken, John could fix it! Recently, he rebuilt an antique grandfather’s clock, for which he was extremely proud. He was well loved and known for always lending a hand to anyone in need. John adored animals, but most especially his beloved Cocker Spaniels, Mandy and Molly. A talented musician, John played lead guitar and bass with several rock-n-roll bands, including the band Thyme (who toured the eastern shore). He loved coaching his kids in soccer and baseball. He also took great joy in freshwater fishing, saltwater fishing, and crabbing. John and his family had purchased a camper together in Georgetown, Delaware several years ago, which afforded him the opportunity to make many more fishing memories back in his home state.

Left to treasure his memory are his wife, Natalie; their children, Melissa Hoebee of Sinking Spring and David Hoebee of Flying Hills; his grandson, Landon Hoebee; his brother, Robert Hoebee (Sandra); and his niece, Shawnn Hudson.

Donations in John’s honor can be made to the Animal Rescue League of Berks County, 58 Kennel Rd, Birdsboro, PA 19508.

Condolences may be expressed at kuhnfuneralhomes.com.