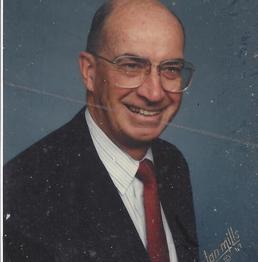 Retired radio executive Richard L. “Dick” Schilpp, 93, of Reading, passed away Saturday, October 8, 2022, in the care of Reading Hospital. Born in Reading, Dick was the son of the late Fridl (Haag) Schilpp Hepler and the stepson of Ralph Hepler. Dick is survived by his wife, Doris (Reed) Breneman Schilpp, whom he married in 1972. Also surviving are: a daughter, Liane, wife of Douglas Petras of Paxtonia, PA; stepson, Reed Breneman, husband of Stephanie, of Maineville, Ohio; three grandsons, Jacob and Evan Petras and Connor Breneman; several cousins and their families, mostly in Germany. A stepson, Ryan Breneman, died in 2006.
Dick was a 1947 graduate of Valley Forge Military Academy where he achieved the rank of cadet captain and was among the recipients of the academy’s highest award, The Order of Anthony Wayne. He was on the varsity swim team and Secretary of the senior class. Dick joined the Air Force in 1950, serving four years as a weather observer which included one year at Barter Island in the Arctic Ocean north of Alaska.

A 1958 graduate of the Pennsylvania State University with a degree in Journalism/Advertising, Dick was President of Kappa Sigma Fraternity and was Student Manager of the campus radio station WDFM, and was also a member of the men’s honorary hat society, Parmi Nous.
Following graduation, he joined the broadcasting staff of Radio Station WEEU, Reading, and for the next 34 years served the station in various professional roles. He moved from announcer to sales, and in 1977 he was appointed VP/General manager of the station. He retired in 1993. He continued to serve on the station's Board of Directors until 1999. In 1993 Dick was named “Broadcaster of the Year” by the Pennsylvania Association of Broadcasters, and in 2005 he was inducted into that organization’s Hall of Fame. In retirement he was employed part-time at the Greater Reading Visitors Bureau and, more recently, by the Goggleworks.

Dick’s community activities included President of the Mohnton Lions Club, President of the Reading Rotary Club, President of the Flying Dutchman Ski Club, and President of the Penn State Club of Berks County. Schilpp had served on the Board of Directors of the United Way of Berks County, Community General Hospital and the Berks Literacy Coalition. He was a former trustee of the Reading YMCA and Director Emeritus of the Reading AAA. Dick had served on the vestry of Christ Episcopal Church, Reading, where he was a longtime member of the choir.
In 1977 he was the first recipient of the Berks Campus of Penn State’s Loyal Penn Stater Award. Dick and his family regularly attended Penn State football games for decades. He was a certified scuba diver, an avid skier, and enthusiastic photographer, and appreciated all types of music. He enjoyed being able to attend many of his three grandsons’ varied sporting events.

Dick’s dying wish was to support the education of his grandsons. Contributions may be made payable to Doris B. Schilpp and mailed in care of Kuhn Funeral Home 739 Penn Ave. West Reading, PA 19611.

A Celebration of Life for Dick will be held at 11:00 AM on Saturday, October 22, 2022, at Christ Episcopal Church, 435 Court Street, Reading PA 19601. Edward J. Kuhn Funeral Home, Inc, is entrusted with arrangements. Condolences may be expressed at kuhnfuneralhomes.com.