To share your memory on the wall of Robert Flanagan, sign in using one of the following options:

Provide comfort for the family by sending flowers or planting a tree in memory of Robert Flanagan.

Provide comfort for the family of Robert Flanagan with a meaningful gesture of sympathy.

Born in Brooklyn, NY, and raised in Scranton, PA, he was a son of the late George and Beatrice (Mawn) Flanagan.

Born in Brooklyn, NY, and raised in Scranton, PA, he was a son of the late George and Beatrice (Mawn) Flanagan.

After graduating from Scranton Tech, he joined the Pennsylvania National Guard. Following his service, he attended the Pennsylvania State Police Academy. During his 31-year career, he was on special assignment to guard President Eisenhower at Gettysburg. Mamie Eisenhower used to love to make him her blueberry pie. He then became bodyguard for Governor Milton Shapp. After retiring from the State Police, he was selected as the Chief of the Muhlenberg Township Police for 11 years. He was very proud of his service to his community!

He was the son-in-law of the late Joseph and Stella Screpesi. He is survived by his wife, Patricia (Screpesi) Flanagan; his son, Michael S. Flanagan, daughter-in-law, Megan (Chambers) Flanagan, their children: Patrick, Joseph, and Kailey Flanagan; his daughter, Kellie A. (Flanagan) Fonte, son-in-law, Pasquale V. Fonte, Jr., and their daughters: Stefania, Juliette and Patrice Fonte; his sister Margaret (Peg) Hafner, Honesdale, PA; sisters-in-law, Anna Mae Siegfried, Shillington, PA, and Connie Screpesi, Millsboro, Delaware; brother-in-law, Raymond Weisbrod, Shillington, PA, and many nephews and nieces who loved their uncle. Bob was a loyal and best friend to many.

Bob was an avid sports fan. He loved his Philadelphia Eagles and Penn State Nittany Lions. He was as well known in State College as he was in Reading! He was a member of Holy Rosary Catholic Church, Ancient Order of Hibernians, and Clover Park. Bob was also a member of the Fraternal Order of Police which included the PA State Police, Melley Memorial Lodge #65, and was a member of the Berks, PA and International Chiefs of Police Associations as well as the PA State Police Retirees Association. He played for the first biddy basketball team in the country and played at Madison Square Garden. He was a football coach to many with the Kenhorst Trojans and a basketball coach for the West Reading All-Stars.

Services will be held at a future date when it is safer to gather.

In lieu of flowers, donations may be made to Parkinson's Foundation. Edward J. Kuhn Funeral Home, Inc., West Reading is honored to assist Bob's family. Condolences may be expressed at www.kuhnfuneralhomes.com. 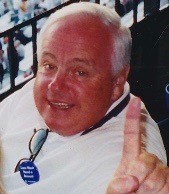 Kenhorst & all Reading Pa. is less of a joyful place now that Trooper Bob has gone home. So many fun times & warm memories from Michael’s graduation to Kelly’s wedding and beyond! May the angels lead into Paradise, may his parents & family welcome him again to the heavenly banquet table. Our love and prayer to Patsy, Michael, Meg, Kelly & Pat.
Phil & Elizabeth Cerrato
Comment | Share Posted Mar 09, 2021 at 08:58pm via Condolence
GM

My condolences to Pat and family. Bob was a good friend and teacher. I know he will be sadly missed. Dominic & Sylvia Pezzino
Comment | Share Posted Mar 04, 2021 at 02:55pm via Condolence
MM

I just heard about Bob’s passing from Bobby Reese. Bob was a key figure in getting the Alvernia basketball program off the ground in the early eighties. I remember him well for his kindness, generosity of spirit, and a wonderful sense of humor. Deepest sympathy to his family on losing a great guy and a good man.

A better friend and pal I could not have had, Many good times togetherit’s a shame things change all too soon. Our prayers are with you and for Bob
Comment | Share Posted Mar 02, 2021 at 01:14pm via Condolence