To share your memory on the wall of Garrett Jones, sign in using one of the following options:

Provide comfort for the family by sending flowers or planting a tree in memory of Garrett Jones.

Provide comfort for the family of Garrett Jones with a meaningful gesture of sympathy.

Garrett G. Jones, 32, of Exeter Township, passed away unexpectedly on Sunday, December 27, 2020. He was a loving son of Gregory and Patricia (Lee) Jones, both of Exeter.

Garrett grew up in the Exeter School District and attended St. Cath... Read More
Garrett G. Jones, 32, of Exeter Township, passed away unexpectedly on Sunday, December 27, 2020. He was a loving son of Gregory and Patricia (Lee) Jones, both of Exeter.

Garrett grew up in the Exeter School District and attended St. Catharine of Siena Roman Catholic Church. He lived and worked in Bel Air, Maryland where he was an active member of the community, before recently moving closer to his family.

Garrett worked at Best Buy for many years, holding several positions including inventory management, loss prevention, and sales associate in the cell phone division. His sincere, charming personality and willingness to take the time to teach each customer about the products he or she were considering made Garrett a popular and successful member of the sales team.

His sensitive and compassionate nature stood out almost as much as his height. At 6'5" tall, Garrett's height commanded attention whenever he entered a room, but his compassion, sincerity, and politeness made a far greater impression on everyone he met.

Garrett's memory will be forever cherished by: his parents, Greg and Patricia; his sister Tiffany McLaughlin (Luke); his brother Jansen Jones of Philadelphia; his maternal grandfather, Earl W. Lee of Exeter, widower of Erminia (Frizzo) Lee; his paternal grandmother Margene Jones, widow of William Jones of Wyomissing; and his nephew James McLaughlin, who was the light of Garrett's life. Garrett was also predeceased by Ruth Kennedy, companion of many years to Earl. Now Garrett is watching over his family from Heaven as their guardian angel.

A Mass of Christian Burial will be celebrated on Friday, January 8, 2021 at 11:00 AM at St. Catharine of Siena Roman Catholic Church, 4975 Boyertown Pike, Exeter, with burial to follow at Forest Hills Memorial Park, Reiffton. Visitation with Garrett's family will be held on Friday from 9:00 until 10:00 AM at the Edward J. Kuhn Funeral Home, Inc, 739 Penn Ave, West Reading. Condolences, tributes, and fond memories may be expressed at www.kuhnfuneralhomes.com.

Receive notifications about information and event scheduling for Garrett 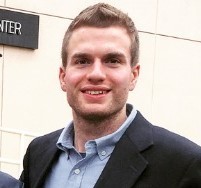 We encourage you to share any memorable photos or stories about Garrett. All tributes placed on and purchased through this memorial website will remain on in perpetuity for generations.

Sending our thoughts and prayers in this difficult time.

Flowers were purchased for the family of Garrett Jones.
Order Now | Show All
Comment | Share Posted Jan 07, 2021 at 07:51am via Floral Arrangements
CG

Jansen: I'm so incredibly sorry for the loss of your brother Garrett. I pray for comfort and peace to envelop you and your family during this time.
Comment | Share Posted Jan 06, 2021 at 08:27am via Condolence
VM

Our deepest condolences to your family during this difficult time. You are in our thoughts and prayers.

Jansen:
We are very saddened to hear about he loss of your brother Garrett. We will keep you, your family, and especially Garrett in our prayers.
Jim and Judy Seternus
Comment | Share Posted Jan 04, 2021 at 11:23am via Condolence
KF